Sweet Potato Pie with Marshmallows after a Thanksgiving hike!

Growing up, Thanksgiving in my home as in many, has always been a family affair. I have years of memories of my Mom and Dad working together to make a large Thanksgiving feast for my brother, sister, and I. Each of us would vie for the sacred wishbone. Most years, Dad would dry it out and then pick which two would break it over a wish. Of course we took turns with him carefully remembering who did it the year before! One year, ever the artist, he spray painted it gold, and still another he soaked it in vinegar which made it rubbery!  Dad was constantly keeping us kids enthralled with amusement!  Good memories!

As we got older, some of us kids did not make it to Thanksgiving for one reason or another. Adam was in the Marines, Sheryl had moved into Philly, and I was away at school at Rutgers. Mom and Dad also divorced with Mom moving south to Florida. What can ya do but go with the flow as they say? She met my stepdad Barry and they built a wonderful vacation home back up here in Lake Wynonah, PA. Traditional Thanksgiving dinners resumed at Mom's in Lake Wynonah.  Mom would bring out Nanny's China, sterling silver service, and Waterford crystal just for the special occasion.  In fact, I don't think she brought it out any other time!

As many of you know, Mom unfortunately passed away in 2009 for reasons left for another essay, another time. Thanksgiving though was Mom's favorite holiday in mine and my sibling's eyes. I have had difficulty getting over this and moving on. My sister now goes out to my brother's for Thanksgiving in San Diego with the West Coast Haynes'. I am just not ready yet to move on. The holiday became painful for me after Mom passed on. I eventually will be able to deal better with it but for now have created a new tradition with John.

John's parents are out at his brother's in Arizona, so John and I have had Thanksgiving together each year after a long hike in the morning. This year, we hiked up the Sand Springs Trail by Shartlesville, PA, to the Appalachian trail on the top of Blue Mountain. Once at the top, we went down the Tom Lowe Memorial Trail to finish a full several mile loop.

At the top of the mountain, we found the spring source for the stream that followed the Sand Springs Trail.  We also spied the tracks of a couple animals on the way up and around the springs.  We identified bobcat, possum, chipmunk, and squirrel tracks. I love that stuff!

The weather was brisk, at times sunny and at other times a little dangerous when we encountered snow squalls at the top of the mountain. At least an inch or two had already fallen up top so hiking was a bit treacherous and cold. Luckily, my good man brought his flask filled with one of our favorite libations, Bulleit Bourbon. Maybe not the best idea while hiking down over snow covered rocks! :)

Enjoy our (belated) Thanksgiving message made on the top of Blue Mountain:


After the long hike, we enjoyed a couple of well earned drinks at the Haags Hotel and then ventured home. The turkey eventually went into the oven at 2:30 PM and John and I finally sat down to eat at 8:30 PM. But it was well worth it. He made his Mom's potato puff and I made my Nana's recipe for Sweet Potato Pie with Marshallows. I actually used to dislike it as a kid. The only thing I liked was the toasted marshmallows!

Year after year, Adam, Sheryl, and I would just hit the marshmallows first. Mom and Dad knew but still put up with our grumblings about having to finish the sweet potatoes. It wasn't until I was in my 20's that I actually began to like them!

Here is my Nanny's recipe for Sweet Potato Pie with Marshmallows.  I substituted mandarin oranges for a little bit sweeter orange flavor.  Check the oven towards the end of cooking time. If you want your marshmallows toastier, keep in a couple minutes longer but make sure you watch them so they don't over cook!

Last night, John and I attended the viewing of our good friend Ed's father in Minersville, PA.  Ed has a large family and it was comforting to see all of his 6 brothers and sisters in attendance.  Ed's father, Butch, passed away the weekend prior surrounded by his children, grandchildren, and great grandchildren. It was just how my Mom passed away back in 2009, surrounded by our family and it really brought back memories.

Ed and I hugged, got choked up, and I offered my condolences. I met Ed's mom, offered my condolences and said, "I'm Marc, I'm friends with Ed and Kim in the Lake I am so sorry for your family's loss." I said the same with his sisters. As I moved down the line, I met one of his brothers and we talked about him being back in the "old neighborhood."  He said it was bittersweet having everyone back at the family home a couple blocks away. I completely understood.

When my Mom passed and we had the memorial service in Lake Wynonah, Adam, Sheryl, and I saw family and friends which we hadn't seen in years.  These days, it is a shame that only weddings and funerals seem to reunite families. I know my siblings and I have made a concerted effort with success to see extended family in North Jersey and California. For it to be truly successful both sides have to make the effort. Our family now sees each other on a regular basis, not just at weddings and funerals.

I did not know Ed's father, but was touched after seeing all of the people who came out to pay their respects.  I came to the last family member in the receiving line, shook his hand firmly and as I had done with each one prior, stated, "I'm Marc, I'm friends with Ed and Kim in the Lake. I am so sorry for your family's loss."

The man in the black suit slightly smiled and said, "I'm the funeral director."
I began stuttering and blurted out, "Oh! Well you have a lovely funeral home!"

John pushed me from behind, shaking his head muttering, "You are SO embarrassing."
All I could do was say, "I'm sorry! Ed has a large family and I lost track of how many brothers I said hi to!"


Earlier in November, my sister Sheryl came out for the weekend and I decided to make one of my Mom's special dishes, Shrimp Creole, for her and John. This is a very basic recipe, like many of Mom's, which can be spiced up or added to. This was one of her fancy dishes that she made for guests when she entertained back in the 80's. She didn't make it that often for shrimp were considered pricey depending on how big they were. Hence, it was only a recipe for special occasions. 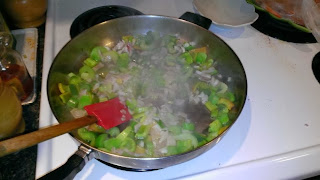 I like this recipe as it needs only a handful of ingredients: shrimp, tomato sauce or marinara, onions, peppers, celery, and whatever spices you would like to add. John and I went shopping that weekend for the ingredients at our local supermarket. I had a stalk of celery at home, but it had wilted and become as limp as a bad pickle so celery was the first item I was looking for. I came across stalks of celery and just didn't want to buy an entire stalk for the one recipe. I don't use it that often, don't snack on it, and have stopped drinking daily bloody marys. For awhile I convinced myself that potato vodka counted as a full day's veggie serving along with the tomato juice and celery. 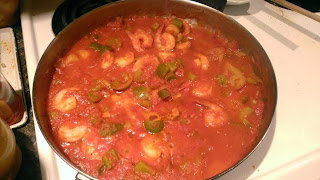 Anyway, I came across pre-chopped celery at a pretty reasonable price, $2.50, in a deli container, and figured it would save me a bit of time chopping it up. I searched for the smallest amount of celery and came across a packed container which was mispriced for 2 CENTS!!!  I showed it to John and asked, "Does this say what I think it says?"  He got real close and squinted at it as I had done for we both can't see writing unless it's up close. He said, "Do you think it will scan at 2 cents?" I replied, "Well if it doesn't, I am demanding it for 2 cents!"  Fast forward to self-checkout and we got the celery for 2 cents!

I spiced up Mom's recipe with red pepper flakes, added sliced mushrooms, and served it over red beans and brown rice.  It came out really well.  You can always add your own Creole or Cajun seasoning for that extra zing!

Serve over rice. Nice with tossed salad and hot bread or rolls. -Mom-