Sunday, August 24th, would have been my Mom's 72nd birthday.  The birthday of a loved one is always a tough day to get through. I went through her recipes and chose two to consider making in her honor:  homemade meatballs or chicken parmigiana.
I left it up to John and he chose the chicken. It is a good recipe, easy to do for a "school night."  In addition, it's also one that I have not made before.

Mom used to make this for us when we would visit her and my stepdad Barry at their home in Lake Wynonah. The breaded chicken, topped with a rich tomato sauce and tons of mozzarella cheese just filled you up. She paired it with a simple garden salad and garlic bread.  There was seldom room for dessert.

I copied the recipe down below as she wrote it. I did make a couple changes. The first being that I wasn't sure if she used a "pound of chicken breasts" or she wanted me to POUND the chicken breasts. Since the meal was for two people, I bought a couple pounds of chicken breast and pounded away to flatten them out. Problem solved and I worked out my frustrations with the meat mallet! Hahaha.


The second change was that after coating the chicken with bread crumbs, I baked it for 15 minutes before topping it with the tomato sauce so that the bread crumbs wouldn't fall off the chicken so easily. After the baking was completed, I pulled the chicken out of the oven and topped with shredded Parmesan cheese. You could use grated cheese instead if you wish.

And finally, I enjoyed the dinner with a 2013 French Bordeaux Rose by Baron Phillippe De Rothschold. It only sounds expensive but tastes wonderful.  I know in my video I said I was also going to open the Rex Goliath Shiraz but Mom would have frowned on me drinking the TWO bottles in one sitting. :)

That evening, John and I were going to grill some homemade Italian sausage from Russo's Market in Wyomissing, PA. If you haven't tried it, it is so good that let's just say it saves us Philly transplants when we need our Italian! It is just as good as anything from the Italian Market, but without the local smells and colorful street urchins. ;)

Anyway, I was hollering into the house from the deck for John to bring out the veggies to grill them up.
"John!!! Bring out the peppers and onions! I need to get them on the grill!" OK, I was kind of like screaming. It had been a long day. "JOHN, where are you? I see you in there walking away from the kitchen! I know you can hear me!" I was actually running from window to window yelling at him. (By now, I realize I could have gotten the veggies myself.)

I had just put the sausage on the grill, heard a creak on the deck, turned around, and there was Charlotte standing next to me. I freaked and jumped almost out of my skin. "OH MY G-D ... MOTHER #$*@&!!!" Even after catching my breath, I could barely muster out,  "Why did you do that?  Charlotte, you snuck up on me without making a noise! Why did you do that!?"

She giggled and handed me two paper bags.
"Here is a bunch of zucchini and here are a couple of peppers so you can stop yelling at John."

With that, she bounded down the deck steps and was across the yard to her place within seconds. At that point, John came out and I handed him the vegetables and said that Charlotte stated I needed to stop yelling at him. He humped triumphantly and said that she was the smartest person in the neighborhood. I rolled my eyes and went back to my grilling.

First, some interesting history about meatloaf from the website Wikipedia:

"American meatloaf has its origins in scrapple, a mixture of ground pork and cornmeal served by German-Americans in Pennsylvania since Colonial Times.  However, meatloaf in the contemporary American sense did not appear in cookbooks until the late 19th century."    http://en.wikipedia.org/wiki/Meatloaf

"In 2007, meatloaf was voted the seventh-favorite dish in the United States according to Good Housekeeping.  During the Great Depression cooking meatloaf was a way to stretch the food budget for families, using an inexpensive type of meat and other ingredients as leftovers; along with spices, it was popular to add cereal grains to the meatloaf to stretch the meat. The tradition lives on with the merits of producing a lower-fat dish with superior binding and consistency.The meatloaf is typically eaten with some kind of sauce or relish."   http://en.wikipedia.org/wiki/Meatloaf

Almost as American as apple pie,  meatloaf is one of those classic dishes that you should learn to make if your mom has a recipe. My Mom was no exception, and while I was growing up made meatloaf at least every other week. My brother Adam and I would fight over the ends of the meatloaf.

Dad would give one of us the end of the meatloaf and the other end would stay on the meatloaf to prevent it from drying out. After years of our bickering, each proclaiming it was "MY TURN" for the end, he eventually gave in and cut off both ends of the meatloaf just to shut us up. My sister, apparently was above the "meatloaf ends" controversy. Or did she just realize that Adam and I were louder than her and would ultimately win? How funny that we fought over it. And why? I think because it was the ceremonial first piece. I laugh as I think back to some of my siblings and my ridiculous squabbles. And the next day, we were so excited to open up our lunch boxes and find inside a cold meatloaf sandwich on white bread with ketchup.

I pulled out Mom's recipe this past week and decided to make it for John and I.  After a stressful week, I was looking for one thing, comfort food! I used ground turkey for this recipe, an equal amount as if I used ground beef, just a personal preference.  I also added some ground black pepper for a little bite.


While I make these recipes, my mind wanders to various meals around our kitchen table in the breakfast room at the Wenonah house. I think back to the 80's wallpaper and cabinets, the kitchen set which is still in Mom's most recent home in Lake Wynonah, the dry sink area nestled in the cabinets where the old small black and white TV sat, Gretchen, our German Shepherd begging silently, and then retreating to the colorful braided rug, her rug, at the other end of the kitchen. There are memories of meals in which we would go around the table by the direction of our father or mother, each of us kids recounting the experiences of the day, what happened at school, what learned. Rambling thoughts that one has while jumping from memory to memory to memory.

I smile, then grow sad, then smile once more. Such is the way of these blogs. They continue to be an emotional journey for me. I have grown so much from the experience of these creating these recipes and writing about them.

And one more thing about the meal with John and I where I served the meatloaf. I got the end. Some things never grow old.  :o) 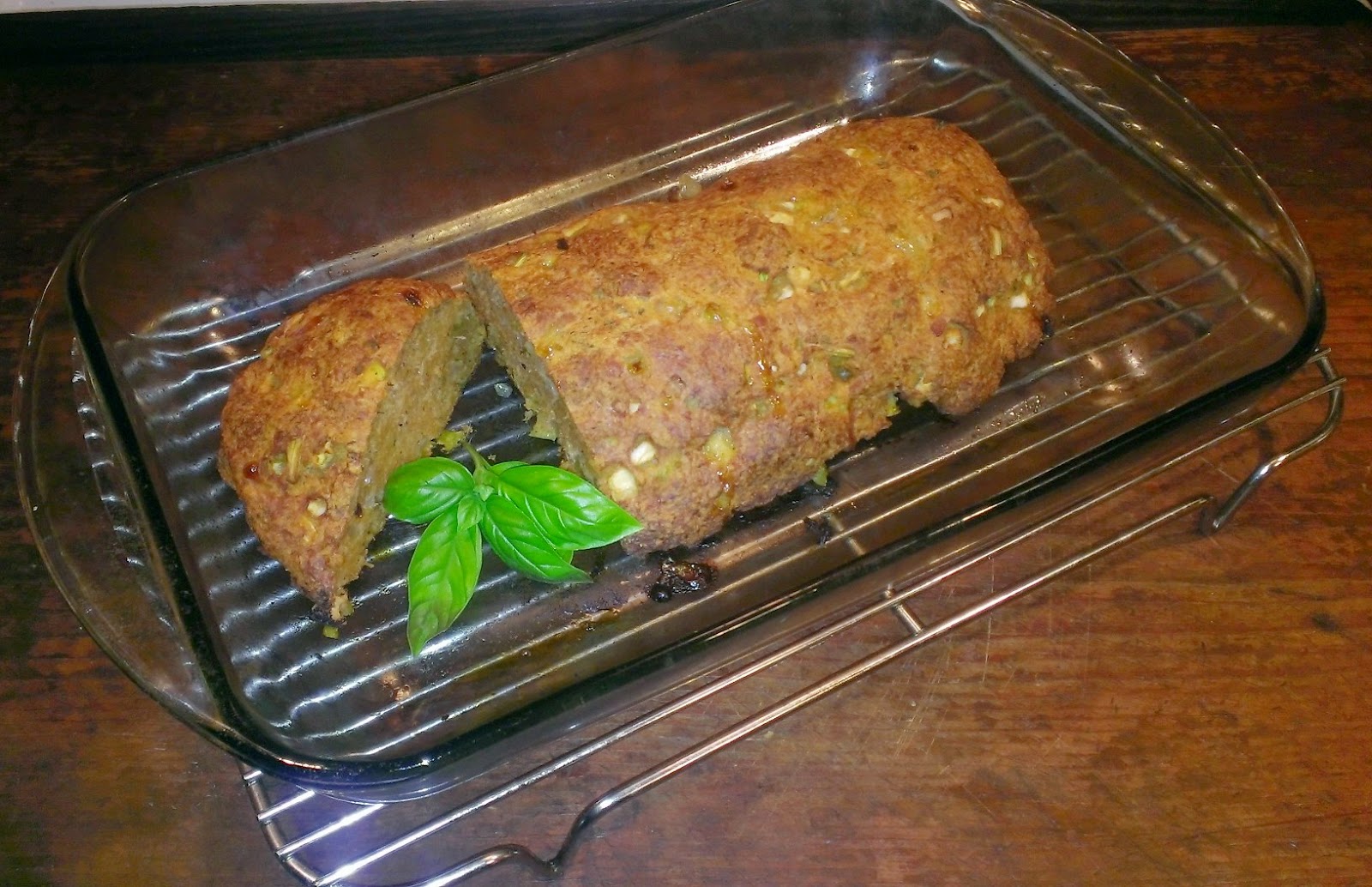 Bloggers note:  When I was growing up, Mom made her's without sauce. Her later recipe included a "sauce." I chose not to include it and make it as I had it growing up.

Last week was an incredibly stressful work week. I'm not going into detail but it was a doozy. I don't want to alienate anyone so I will keep mum.  I have an incredible view out my kitchen window across my yard; First, the middle aged oak tree with all the bird feeders, then onto the long rectangular shaped flower garden in the middle and finally ending at the other side of the yard at our fire-pit.

I will often come home and make myself an after-work cocktail and just gaze out at the yard, either from the kitchen window or relax out on the deck. I love my yard. This particular day, I leaned up against the kitchen sink counter and spied our "yard" rabbit out by the middle flower bed.

He was munching away for a good five minutes on clover, irises, alfalfa, various grasses, lily of the valley, and whatever else within hopping distance. One of several chipmunks taking up residence in each corner of the yard ran down the long railroad tie along one side of the bed just like it was a boardwalk. He passed the rabbit eventually coming to the bottom of the oak tree where the bird feeders hang. Neither reacted to each other's presence. Quickly gathering up fallen birdseed, he sped back passing the rabbit once more, down the "boardwalk" and across the rest of the yard to one of his little storerooms in the rocks next to the fire-pit area.

Meanwhile, one of our two hummingbirds zoomed in to feed at the hanging feeder in the oak. Hovering for 30 seconds at a time at each feeder, he took his fill and then sat on a branch nearby for a moment before being almost shoved off by the passing of one bully of a cat bird.

Two robins hopped by pulling up worms.  One of them flew vertical up into the oak tree. I followed her with my eyes and actually discovered that there is a nest with two babies that I can see from the window! It is way up but I can just make out their bobbing heads. My stress began to melt away.

Moxie, my cat, rubbed at my ankles wanting some attention so I picked her up and held her in my arms. We both continued to look outside. Moxie began chattering her teeth in excitement at all the activity. I looked at her excited by it all, smiled, and then looked back outside again.

I figured all I needed now for perfection was Bambi or Flower the Skunk to wander by.