John and I were on vacation visiting family the other month. We spent a week seeing his folks in Sedona, Arizona, and then a week seeing my folks in Arcata, California. My stepmom Martha has a great cookbook called "The Chopped Cookbook" by the Food Network Kitchen. John and I, as well as Dad and Martha, are big fans of the show so I eagerly copied some recipes from the cookbook.

I love Brussels sprouts and usually saute' them up with garlic, olive oil, and finish them off with a balsamic glaze. I was looking for something new and I found a great recipe in this book for roasted Brussels sprouts with salami, potatoes, and onions. (By the way, I always thought is was just Brussel, not Brussels.)  So thanks Martha, for a new recipe and a new favorite! The recipe will appear below.

While prepping, my mind began to wander as it always does. I was also playing some great music on my phone so I figured I'd share the evening with you. I began slicing up the salami, it called for 1/4 cup. I think I put in 1/2 cup and was munching on it along the way.

This video, by Dianne Reeves, "Better Days" was one of Mom's favorite songs. I starting thinking back to the 70's and my childhood.

I thought back for some reason to our former president Jimmy Carter. I think it was because he was recently in the news commenting on our current president. Anyway, I was six years old, it was 1976, and Jimmy Carter was running for president. As a kid, I didn't know politics. My parents talked about being Democrats but I had no idea what it meant. They were for this man called Jimmy Carter, he liked peanuts and he was running against someone called a Republican, Gerald Ford. I didn't know much about either man but I knew I liked Gerald Ford. He was stately, impressive, tall. Apparently he tripped quite often but I still liked the guy. I told my parents, at six years old, that I wanted Gerald Ford to become President again and they were mortified. LOL. My parents were happy when he was the last Republican for president that I ever supported. :)

So the salami was chopped, and I moved onto chopping the Brussel(s) sprouts. Now I am so annoyed while typing this because I found that it is actually Brussels with an 's'. Being a 'foodie', I pride myself on my knowledge of food  and never realized that it had an 's' on the end. ARGH!

OK, OK, back to chopping. And back to my cocktail. I am drinking a smokey single malt Scotch, Laphroig, YUM. :)

I chopped up the Brussels sprouts and began to listen to another favorite song, "They Don't Know" by Tracey Ullman. This is an incredible song from the 80's about love. How many of us related to this song!!! Great 80's sounds with a 50's/60's doo-wop vibe. I often post it on my Facebook page and friends just can't get enough of it.

I finished up with the Brussels sprouts and started chopping up onions. My thoughts wandered again back to the 70's with a story of my mother driving our light blue Chevy Chevette. Those ugly little cars looked like this: 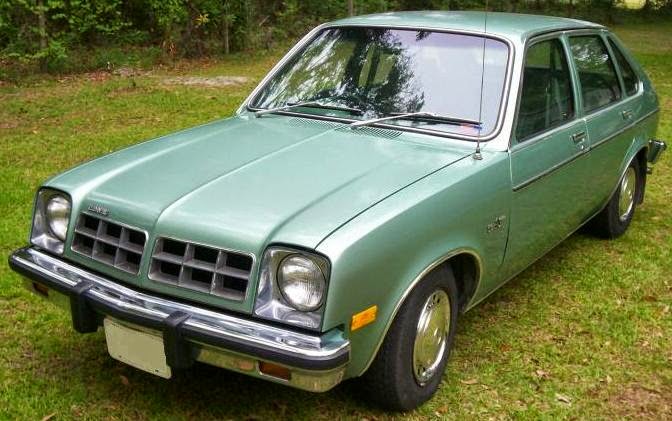 So I was riding with Mom. I was either 4 or 5. I don't think I was in school yet because I remember driving with Mom somewhere during the day, just me and her. That would have meant that Adam and Sheryl were both in school. Anyway, I was sitting in the front seat (with no car seat - HELLO, it was the 70s!) and I decided to be adventurous and roll the window down. Mom yelled at me, "Marc, don't touch the window, ROLL IT UP!"

Like the good boy I was, I did and proceeded to roll the window up on my finger. Don't ask me how, don't ask my why but I kept my finger there. I manually rolled up the window on my finger so tight I screamed. I was in such trauma I could not figure out that if I only 'unrolled' the window, I would be free. No ... I just screamed. Mom had to pull the Chevette over and save my finger from the manually rolled up window.  No wonder I am freaked out by cars that still have those manual roll up windows.

My eyes started watering from the onions, I had forgotten to chill them in the freezer for 10 minutes. This helps in cutting down the watery eye syndrome. I worked on quartering about 12 ounces of red bliss potatoes, cleaned beforehand of course.

The next song I listened to was the Bangles "Manic Monday."

By now I had poured my self a glass of Coppola Vinyard's Rosso red wine and was enjoying humming along, thinking about the 80's. I thought about a trip I took with my family one summer through Colorado and New Mexico. We were having lunch at a rest stop picnic area and I went off wandering. There was a large hill overlooking the rest stop so I decided to hike up it. I was about 50 feet above the picnic area and Mom saw me at the top.

"Marc!! What are you doing?! Get the hell down from there!" she screamed.
I screamed back OK and I began to scramble down the hillside.

As I went to descend, I spied a vibrant pink cactus flower. I thought, Mom would just love this! I proceeded to pluck it and climb down the hill. I presented her with the flower and she instead screamed. My hands were COVERED in cactus spines. Yes I realized I had a couple but I figured it was just a couple, not over 20. So the next 15 minutes at the picnic table were spent with Mom and a pair of tweezers carefully plucking out cactus spines from my now swelling hands.

Eventually the swelling went down on my pin cushion hands. Mom kissed me for picking her the flower and made me promise never do that again. The flower was put on the dashboard of the Ford station wagon so she could look at it as we continued on the road down to Taos, New Mexico. It wilted from the harsh desert sun but Mom's memory of it lasted until her last years bringing it up every so often to me with a smile on her face.

Back to the recipe! After chopping up all the ingredients, I sauteed up the salami and put it aside. I mixed up the chopped up Brussels sprouts, onions, and potatoes and roasted them in the oven. Afterwards, I stirred in the cooked salami and topped the dish with some fresh flat-leaf parsley.

The recipe came out great, and it was a nice evening listening to music and reminiscing. Even though this was not Mom's original recipe, I feel it has a place in my series "Cooking Through Family" just because of the evening preparing it.

3. Season with  1 1/4 tspn kosher salt. Roast at 400'F stirring the veggies halfway through the cooking time, until browned, about 30 minutes.

4. Stir in the reserved salami and a handful of chopped fresh flat-leaf parsley leaves.